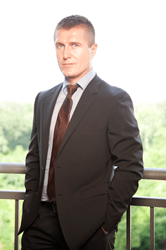 “Obesity is one of the biggest threats to American society right now,” Becic said. “We must understand the magnitude of this discovery. For that reason, I am declaring, along with my Health Fitness Revolution movement, a war against obesity.”

Samir Becic, a world-renowned fitness expert boasting numerous accolades, is one of the most prominent authorities in the health and fitness industry. He has garnered worldwide media attention, is consistently ranked as one of the world’s best fitness experts and is a recurring guest author for many national and international media outlets.

He plans to aggressively lead the fight against the obesity epidemic and called for Americans to rally with him in this united front. He personally invites the president of the United States, senators, congresspeople, governors, mayors, media personalities and celebrities, athletes, CEOs, schoolteachers, nonprofit organizations, and everyone else to join him in this crucial fight for America’s continuation as a leading world power.

Becic is glad several presidents have also addressed this issue.

He quoted President John F. Kennedy, who said, “Physical fitness is not only one of the most important keys to a healthy body, it is the basis of dynamic and creative intellectual activity.”

Becic also cautioned against the implications of having an obese society.

“Obesity will impact social interaction, financial stability, military strength, creativity, discipline and focus. It will collide with all attributes that make our civilization what it is today,” he said.

His call to action urged Americans to live a balanced lifestyle, incorporating exercise and healthy nutrition, as well as mental, social and spiritual health into every individual’s way of life. He said the war on obesity demands a strong and fit United States, a nation that he hopes will lead the world for decades to come.

His plan has an all-encompassing strategy that has included speaking with and motivating presidents, prime ministers, government officials, cardinals and other religious leaders, businessmen and superintendents in direct meetings to support his cause. Becic has spoken to thousands of schools, homeless shelters, corporations, churches and nonprofit organizations.